The Paris-Durham shock code is a software dedicated to the modeling of magnetized molecular shocks propagating in interstellar environments. It simulates a stationary, plane-parallel, and multi-fluid shock wave traveling across a layer of gas and dust irradiated or not by an external UV radiation field.

In practice, the code follows the dynamical, thermal, and chemical evolutions of a fluid particle during its trajectory from the pre-shock medium to the post-shock medium. These evolutions are computed by solving the 1D magnetohydrodynamics conservation equations for the number density, the mass density, the momentum, and the energy of the neutral, the positively charged, and the negatively charged fluids, taking into account chemical transformations, fluids interactions, atomic and molecular excitation, and heating and cooling processes. The chemical network used in the code includes 140 species interacting through ~3000 chemical reactions. The code also includes the computation of the populations of the levels of H2, the most abundant molecule in space, and an important cooling agent, collision, and reaction partner of the gas. In output, the code provides the thermodynamical and chemical structures of the shock (e.g. temperature, fluid velocities, and abundances), the column density profiles, and the line intensities of H2 and of several ionized or neutral atoms. Since the abundances of atoms and molecules are known at each point, the code can be coupled to a dedicated LVG (large velocity gradient) model to compute their level populations, line emissivities, and integrated intensities, that can then be compared to the observations. The corresponding LVG model will soon be available on this website. 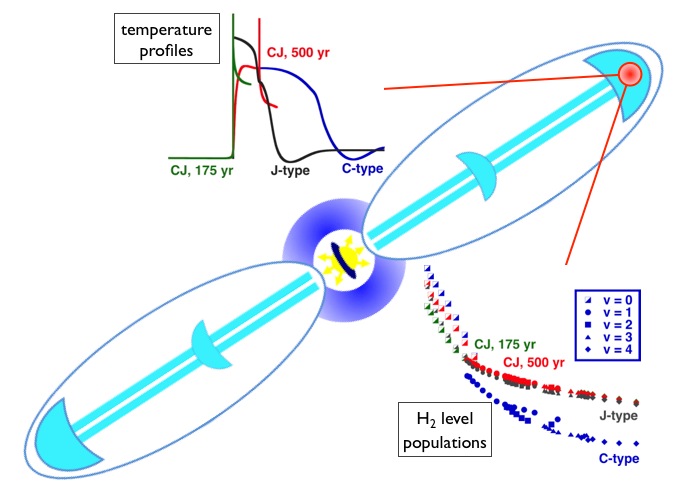 The Paris-Durham shock code can be used to study:

The documentation describing the physics implemented in the model is available on the website. It also contains a list of references providing more details on the shock model, examples of studies based on its use, and developments of parallel versions. The code accessible online can be safely used to model C-type shocks at moderate velocities (VS ≤ 100 km/s) propagating in magnetized gas or J-type shocks at low velocities (VS ≤ 30 km/s) propagating in weakly magnetized environments. Several works are in progress to improve this version and allow the computation of J-type shocks at higher velocities. These include: